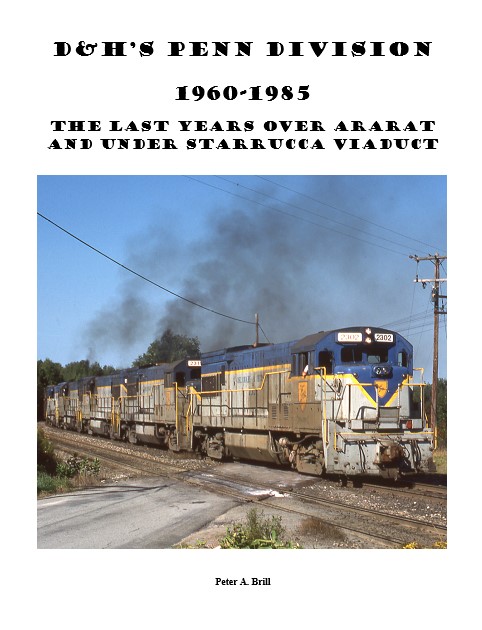 D&H's Penn Division, 1960-1985: The Last Years Over Ararat and Under Starucca Viaduct by Peter Brill

The three decades following the end of World War II robbed many followers of northeastern railroads of their favorite road(s).The decline of the anthracite industry and heavy industry were important factors and other contributing factors included the new Interstate Highway System, increased truck competition and the opening of the St. Lawrence Canal. The O&W was abandoned in 1957 and the L&NE followed in 1961. The Erie and the DL&W disappeared in the merger that produced EL in 1960. By the end of the 1960’s, the PRR, NYC and NYNH&H had been absorbed into PC.

Despite the corporate “carnage” in the 1950’s and 1960’s, there was still a surviving group of four venerable carriers that had depended on anthracite traffic. Additionally, the two merger products, EL and PC, were beginning to develop their own followings. But then, the coming of Conrail on April 1, 1976 marked the end of the CNJ, LV, RDG, L&HR, EL and PC. Many more northeastern railfans and historians were now bereft of their favorite road as five colorful, including four long-lived companies, were absorbed into the new colossus.

However, there was still one colorful, long-lived carrier in the proximity. Moreover, this company had its roots in the anthracite industry like many of the “departed” roads. The Delaware & Hudson had made a successful transition from an originator of anthracite traffic to a bridge line from Wilkes-Barre to New England and Canada. Its Pennsylvania, operations featured heavy tonnage trains clawing their way up a steep, long mountain grade, often with the assistance of pushers. Add in a fleet of Alco’s and friendly personnel and it was little wonder that the D&H’s Pennsylvania Division became a popular trip destination and topic of articles and books.

Now, post-Conrail, the D&H did not assign five smoke-belching Alco’s to the point of a 7,000 ton RW-6, the “Paper Train”, and stop it in the shadow of the Erie’s famous Starrucca Viaduct for the benefit of photographers. Nor did the D&H assign Engineer Bernard T. Gill to be the company’s “ambassador” to the “faithful” trackside while the pushers were coupled on. And the U23B/RS3U pusher was not added to give us a second ear-shattering motive power set to record. Certainly, the D&H did not build Route 171 to facilitate our chase to Starrucca, Thompson, Ararat and other locations enroute. It just seemed that way.

Actually, the D&H was battling for its very life as it had belatedly been thrust into the role of Conrail’s sole competitor in the Northeast when Chessie pulled out of the role at the last minute. How this situation, relating to the Pennsylvania Division, developed in the 1960’s and 1970’s and was eventually resolved in the 1980’s is the focus of this book.

This 170-page book is intended as the second of a two-volume treatment of the D&H’s Pennsylvania Division. By “Pennsylvania Division” we mean the line from Wilkes-Barre to Nineveh Jct. via Ararat and Lanesboro. This includes the latter day Dupont connection with the Lehigh Valley and the jointly operated, with PRR/PC, Wilkes-Barre Connecting Railroad. This does not include Penn Central’s Sunbury line or DL&W/EL’s Taylor to East Binghamton line, both of which came under D&H ownership subsequent to the formation of Conrail.

The period 1960-1985 is covered in this volume while the period 1930-1959 is covered in an upcoming book. This book contains 182 color images and forty-eight black and white images. With 230 images on 170 pages, the photographic content constitutes two-thirds of this book while the text constitutes the remaining third. The roster of photographers includes; Curt Carlough, Jerry Dziedzic, Robert Pennisi, Richard Taylor, Ray Threlfall and the author. The upcoming book on 1930-1959 is heavy on text and less so on images.

These are the chapter headings in the book:  Images Along the Line; Anthracite:  Going, Going, Gone; Tahawus Traffic via Wilkes-Barre Ends; Operations in the 1960’s/1970’s; A Drawn out Ending and Motive Power.

There is a bibliography and index. This is a soft-cover book on glossy paper.