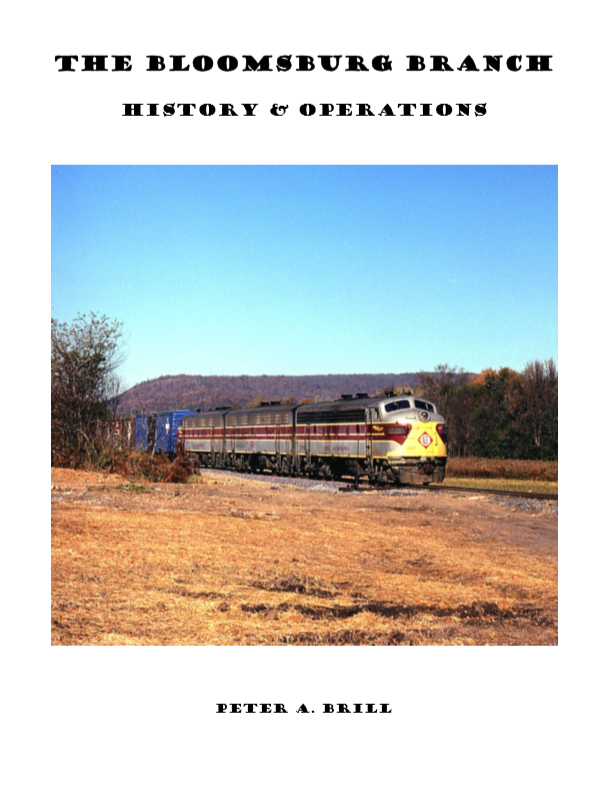 BK-LACK-BLOOMHO
$ 68.00 USD
This product is out of stock.
Product is not available in this quantity.

The subject of this book was organized as an independent railroad in 1852, a year before the DL&W itself was organized. However, several investors in the predecessors of the DL&W were involved in the organization of the Lackawanna & Bloomsburg Railroad. The DL&W was organized in 1853 and it maintained an intense interest in the L&B until DL&W finally took control of the little company in 1873. Anthracite, iron ore and limestone deposits along the projected route of the L&B were the great attraction for Scrantonians invested in the DL&W and the Lackawanna Iron & Coal Company. Construction of the L&B commenced in 1854 and progressed in several stages until an eighty-mile line to Northumberland was completed in 1860. DL&W funded some of the construction.. As early as 1855, the L&B served DL&W’s Griffin Farm colliery in Scranton (later Bellevue Colliery). As of 1871, the L&B was a significant anthracite hauler. In 1873 DL&W took control of the L&B which became its Bloomsburg Division and later, the Bloomsburg Branch. By 1885, the Bloomsburg Division hauled more Northern Field anthracite tonnage than its parent. Tonnage swelled on the Bloomsburg Division once DL&W built the seven-mile Hanover & Newport Branch in 1895 to serve a large DL&Wowned property near Nanticoke which eventually hosted four major collieries. The “Bloom” extended through a major anthracite region including such notable locations as Scranton, Taylor, Pittston, Kingston, Plymouth and Nanticoke. The anthracite traffic and related locations of the “Bloom” are the focus of the companion volume. The character of the branch changed markedly below Shickshinny, the end of the anthracite region and this volume covers the locations down to the terminus at Northumberland. This includes three heavily industrialized towns; Berwick, Bloomsburg and Danville. This section of the branch became increasingly important as the anthracite traffic dwindled in the 1940’s and later. Berwick and Bloomsburg hosted significant early railcar building companies which were eventually absorbed into the giant American Car & Foundry Company in 1899. ACF later closed the Bloomsburg plant in favor of the Berwick facility which at its peak occupied over 400 acres. This industry generated substantial traffic in the form of inbound raw materials and outbound freight and passenger cars. Over the decades, ACF built and repaired thousands of freight cars for the DL&W including box cars, open hoppers, covered hoppers and gondolas. The company also outfitted DL&W gondolas to haul air-activated cement canisters. Bloomsburg was more than a one company town and in the second half of the 1800’s hosted a half-dozen iron furnaces and foundries. Silk and carpet manufacturing developed at the end of the century as the metal trades went into decline. For a short period, the Bloomsburg Locomotive Works built small units for mines and industries. Danville’s first iron foundry opened in 1829 and the town was the site of perhaps the nation’s first anthracite blast furnace. The Montour Iron Company was a pioneer in “T” rail manufacturing for the railroad industry. The lower section of the Bloomsburg Branch also offered major interchanges. Unit bituminous coal trains were received from the Reading at Rupert for forwarding to the Metropolitan Edison generating plant at Portland. A lesser number of iron ore trains for Bethlehem Steel at Lackawanna, NY were also received off the Reading. Passenger service, including Pullman sleeper service, was offered in conjunction with PRR between Pittsburgh and Scranton via Northumberland and rights over PRR trackage into Sunbury.. The Bloomsburg Branch achieved a remarkable degree of notoriety in the early 1970’s as EL deployed a fleet of Funits, often in ABBA sets, to handle the daily freights between Taylor Yard and Northumberland. 292 pages, soft-cover, glossy paper, indexed, 27 black & white photos, 47 color photos, 35 illustrations, 62 maps, 15 ads and a bibliography for both Bloomsburg Branch volumes.