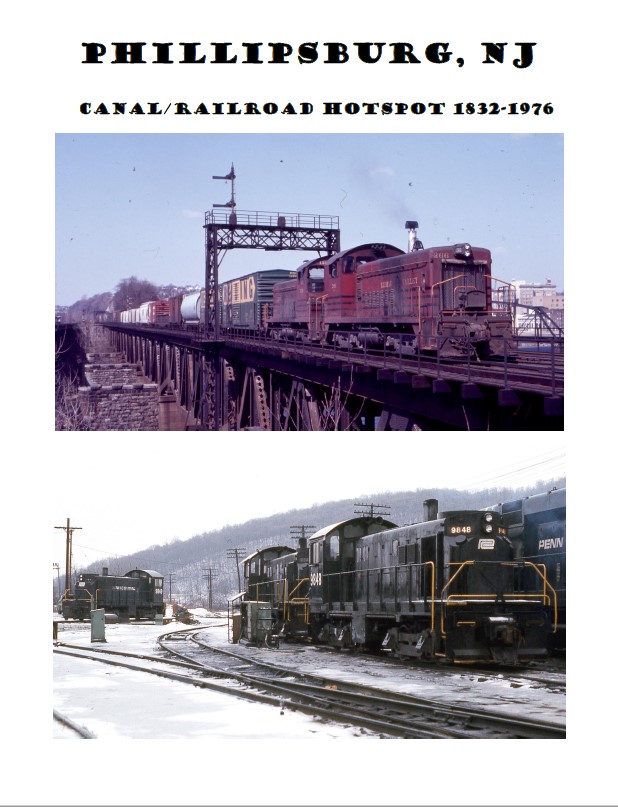 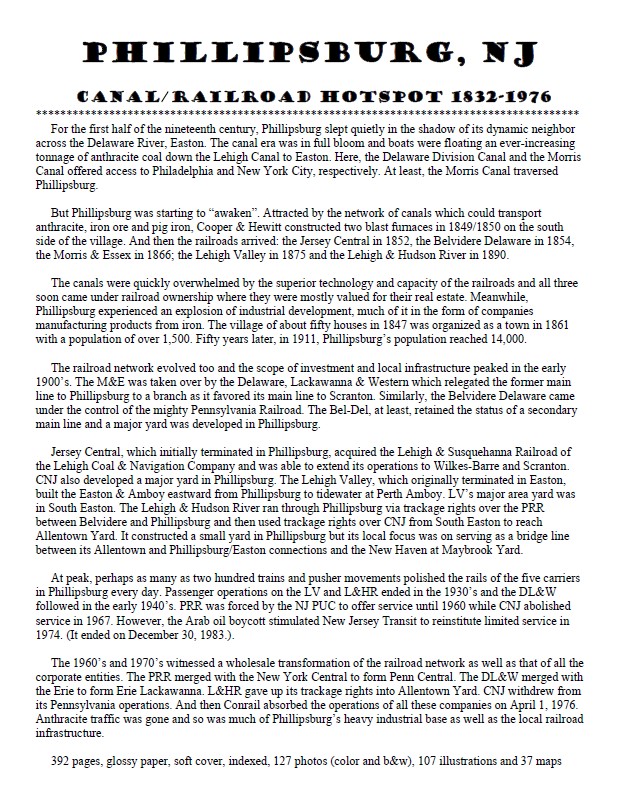 BK-PBURG
$ 82.00 USD
This product is out of stock.
Product is not available in this quantity.

For the first half of the nineteenth century, Phillipsburg slept quietly in the shadow of its dynamic neighbor across the Delaware River, Easton. The canal era was in full bloom and boats were floating an ever-increasing tonnage of anthracite coal down the Lehigh Canal to Easton. Here, the Delaware Division Canal and the Morris Canal offered access to Philadelphia and New York City, respectively. At least, the Morris Canal traversed Phillipsburg.

But Phillipsburg was starting to “awaken”. Attracted by the network of canals which could transport anthracite, iron ore and pig iron, Cooper & Hewitt constructed two blast furnaces in 1849/1850 on the south side of the village. And then the railroads arrived: the Jersey Central in 1852, the Belvidere Delaware in 1854, the Morris & Essex in 1866; the Lehigh Valley in 1875 and the Lehigh & Hudson River in 1890.

The canals were quickly overwhelmed by the superior technology and capacity of the railroads and all three soon came under railroad ownership where they were mostly valued for their real estate. Meanwhile, Phillipsburg experienced an explosion of industrial development, much of it in the form of companies manufacturing products from iron. The village of about fifty houses in 1847 was organized as a town in 1861 with a population of over 1,500. Fifty years later, in 1911, Phillipsburg’s population reached 14,000.

The railroad network evolved too and the scope of investment and local infrastructure peaked in the early 1900’s. The M&E was taken over by the Delaware, Lackawanna & Western which relegated the former main line to Phillipsburg to a branch as it favored its main line to Scranton. Similarly, the Belvidere Delaware came under the control of the mighty Pennsylvania Railroad. The Bel-Del, at least, retained the status of a secondary main line and a major yard was developed in Phillipsburg.

Jersey Central, which initially terminated in Phillipsburg, acquired the Lehigh & Susquehanna Railroad of the Lehigh Coal & Navigation Company and was able to extend its operations to Wilkes-Barre and Scranton. CNJ also developed a major yard in Phillipsburg. The Lehigh Valley, which originally terminated in Easton, built the Easton & Amboy eastward from Phillipsburg to tidewater at Perth Amboy. LV’s major area yard was in South Easton. The Lehigh & Hudson River ran through Phillipsburg via trackage rights over the PRR between Belvidere and Phillipsburg and then used trackage rights over CNJ from South Easton to reach Allentown Yard. It constructed a small yard in Phillipsburg but its local focus was on serving as a bridge line between its Allentown and Phillipsburg/Easton connections and the New Haven at Maybrook Yard.

At peak, perhaps as many as two hundred trains and pusher movements polished the rails of the five carriers in Phillipsburg every day. Passenger operations on the LV and L&HR ended in the 1930’s and the DL&W followed in the early 1940’s. PRR was forced by the NJ PUC to offer service until 1960 while CNJ abolished service in 1967. However, the Arab oil boycott stimulated New Jersey Transit to reinstitute limited service in 1974. (It ended on December 30, 1983.).

The 1960’s and 1970’s witnessed a wholesale transformation of the railroad network as well as that of all the corporate entities. The PRR merged with the New York Central to form Penn Central. The DL&W merged with the Erie to form Erie Lackawanna. L&HR gave up its trackage rights into Allentown Yard. CNJ withdrew from its Pennsylvania operations. And then Conrail absorbed the operations of all these companies on April 1, 1976. Anthracite traffic was gone and so was much of Phillipsburg’s heavy industrial base as well as the local railroad infrastructure.