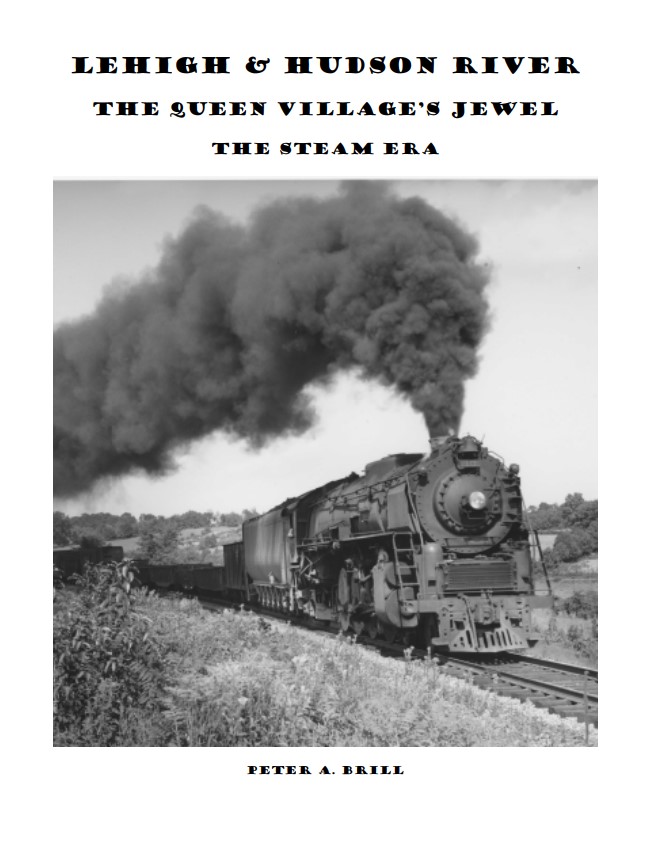 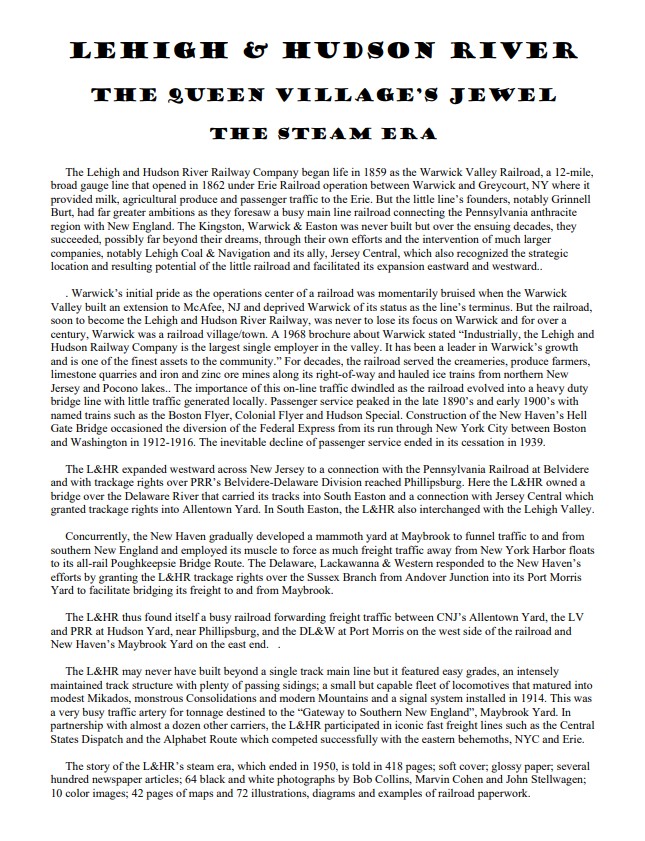 BK-LHR-STEA
$ 74.00 USD
This product is out of stock.
Product is not available in this quantity.

The Lehigh and Hudson River Railway Company began life in 1859 as the Warwick Valley Railroad, a 12-mile,broad gauge line that opened in 1862 under Erie Railroad operation between Warwick and Greycourt, NY where it provided milk, agricultural produce and passenger traffic to the Erie. But the little line’s founders, notably Grinnell Burt, had far greater ambitions as they foresaw a busy main line railroad connecting the Pennsylvania anthracite region with New England. The Kingston, Warwick & Easton was never built but over the ensuing decades, they succeeded, possibly far beyond their dreams, through their own efforts and the intervention of much larger companies, notably Lehigh Coal & Navigation and its ally, Jersey Central, which also recognized the strategic location and resulting potential of the little railroad and facilitated its expansion eastward and westward...

Warwick’s initial pride as the operations center of a railroad was momentarily bruised when the Warwick Valley built an extension to McAfee, NJ and deprived Warwick of its status as the line’s terminus. But the railroad, soon to become the Lehigh and Hudson River Railway, was never to lose its focus on Warwick and for over a century, Warwick was a railroad village/town. A 1968 brochure about Warwick stated “Industrially, the Lehigh and Hudson Railway Company is the largest single employer in the valley. It has been a leader in Warwick’s growth and is one of the finest assets to the community.” For decades, the railroad served the creameries, produce farmers, limestone quarries and iron and zinc ore mines along its right-of-way and hauled ice trains from northern New Jersey and Pocono lakes.. The importance of this on-line traffic dwindled as the railroad evolved into a heavy duty bridge line with little traffic generated locally. Passenger service peaked in the late 1890’s and early 1900’s with named trains such as the Boston Flyer, Colonial Flyer and Hudson Special. Construction of the New Haven’s Hell Gate Bridge occasioned the diversion of the Federal Express from its run through New York City between Boston and Washington in 1912-1916. The inevitable decline of passenger service ended in its cessation in 1939. The L&HR expanded westward across New Jersey to a connection with the Pennsylvania Railroad at Belvidere and with trackage rights over PRR’s Belvidere-Delaware Division reached Phillipsburg. Here the L&HR owned a bridge over the Delaware River that carried its tracks into South Easton and a connection with Jersey Central which granted trackage rights into Allentown Yard. In South Easton, the L&HR also interchanged with the Lehigh Valley.

Concurrently, the New Haven gradually developed a mammoth yard at Maybrook to funnel traffic to and from southern New England and employed its muscle to force as much freight traffic away from New York Harbor floats to its all-rail Poughkeepsie Bridge Route. The Delaware, Lackawanna & Western responded to the New Haven’s efforts by granting the L&HR trackage rights over the Sussex Branch from Andover Junction into its Port Morris Yard to facilitate bridging its freight to and from Maybrook.

The L&HR thus found itself a busy railroad forwarding freight traffic between CNJ’s Allentown Yard, the LV and PRR at Hudson Yard, near Phillipsburg, and the DL&W at Port Morris on the west side of the railroad and New Haven’s Maybrook Yard on the east end. .

The L&HR may never have built beyond a single track main line but it featured easy grades, an intensely maintained track structure with plenty of passing sidings; a small but capable fleet of locomotives that matured into modest Mikados, monstrous Consolidations and modern Mountains and a signal system installed in 1914. This was a very busy traffic artery for tonnage destined to the “Gateway to Southern New England”, Maybrook Yard. In partnership with almost a dozen other carriers, the L&HR participated in iconic fast freight lines such as the Central States Dispatch and the Alphabet Route which competed successfully with the eastern behemoths, NYC and Erie.