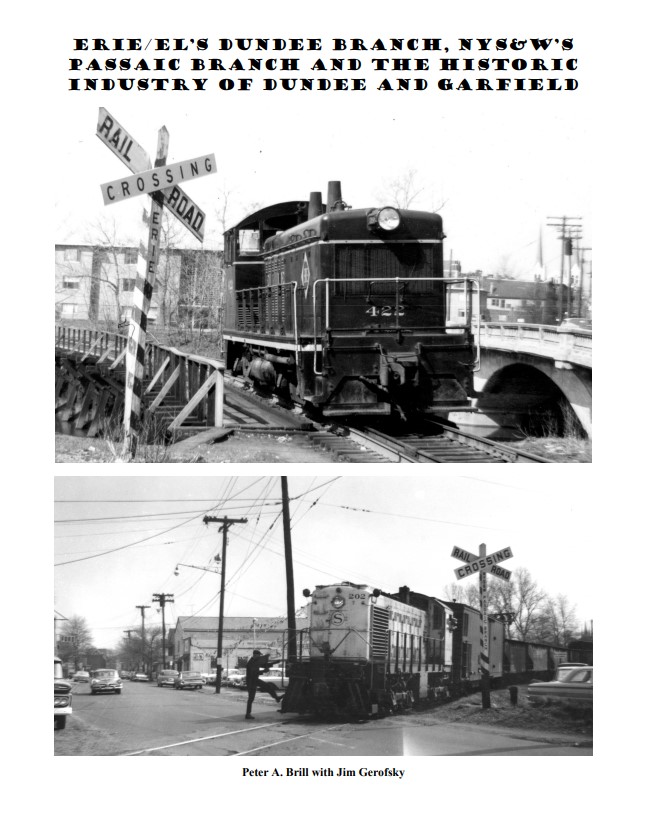 BK-EL-DUND
$ 39.00 USD
This product is out of stock.
Product is not available in this quantity.

“The DCIHD is significant as a surviving, intact,interconnected component of the textile-industry-related landscape that definedPassaic, Clifton, and surrounding communities from the late 19th through themid-20th centuries.” This is a quote from the Library of Congress describingthe significance of the Dundee Canal Industrial Historic District. Threeindustrial complexes, including the most famous, Botany Worsted Mills, areincluded in the DCIHD but dozens more are not and some were internationallyknown in industries other than the textile industry.

Companies were initially attracted by the availability ofwater for power, transport and as an ingredient in manufacturing processes. TheDundee Water-Power & Land Company, owner of the land and water power,sought to attract more companies and commenced building a short branch to theErie’s newly-opened Bergen County Short Cut in 1881. By 1882 it was operated bythe Erie as the Dundee Branch or Spur. Three years later, the Erie and theNYS&W sparred as the latter built the Passaic Branch and the Erie extendedtheir branch under the Bergen & Dundee banner, both seeking to serve a newlyindustrialized area. Over time, the density of industry served by each branchsupported a total mileage of sidings almost equaling the length of the branch.Competition between the two railroads soon ended as the Erie acquired theNYS&W in 1898, an arrangement lasting four decades.

The explosive growth in the late 1890’s and early 1900’s ofthe industrial base in Passaic, including the area which would become theBorough of Garfield in 1898, fueled the rapid population growth of the region.Many of the textile firms were owned by German interests and a large-scale waveof immigration from countries throughout Europe provided much of the manpowerand womanpower for the mills and came to represent a substantial fraction ofthe region’s populace. Botany Mills in the Dundee section of Passaic was NewJersey’s largest industrial enterprise for a period of years.

Passaic achieved national recognition as a center for themanufacture of woolen products while nearby Paterson was the “Silk City”. Bothcities endured major strikes in the 1920’s but the 1926 Passaic Textile Strikegained national attention and was still capable of generating a book a centurylater.

While passenger service on both the Erie and NYS&Wbranches was minimal and short-lived due to the proliferation of trolleyservice and the proximity of the residential neighborhoods to the factories,freight service flourished for decades. As both the Dundee Branch and thePassaic Branch were only about three miles long; included bridges withsignificant restrictions and connected to a multitude of private sidings, boththe Erie and the NYS&W assigned small motive power in the steam and dieseleras.

The dominant local textile industry went into decline afterWorld War II. Many factors combined to decimate the mills that had onceemployed almost 20,000 workers. Companies in other industries continuedoperating and the roster included well known railroad industry suppliers; U. S.Rubber, Pantasote and Okonite. But the general trend of de-industrialization thatplagued the Northeast could not be avoided and by the time of Conrail there wasnot much left.

NYS&W service ended in 1968, a victim of a compromisedbridge over the Passaic River and the last customer converting from coal tooil. Conrail eventually abolished service on the Dundee Branch in 1995 and theremnants of the Dundee Branch lay dormant until a new company, the New York& Greenwood Lake Railroad, arrived on the scene in 1997. The NY&GLmanaged to attract some new business and operate part of the branch for alittle over a decade into 2009 after which there was sporadic service for a fewmore years.

Finally, NY&GL sold out to a developer in 2019 and muchof this once heavily industrialized area was slated for residential and lightcommercial development while governmental agencies succeeded in preserving thestructures of a few of the entities that once defined the region as the DundeeCanal Industrial Historic District. Unfortunately, the tracks of the Erie/ELand NYS&W which once served the vital purpose of connecting theseindustries to each other and to the rest of the Nation and indeed the worldwere not preserved. This book aims to remedy that oversight.