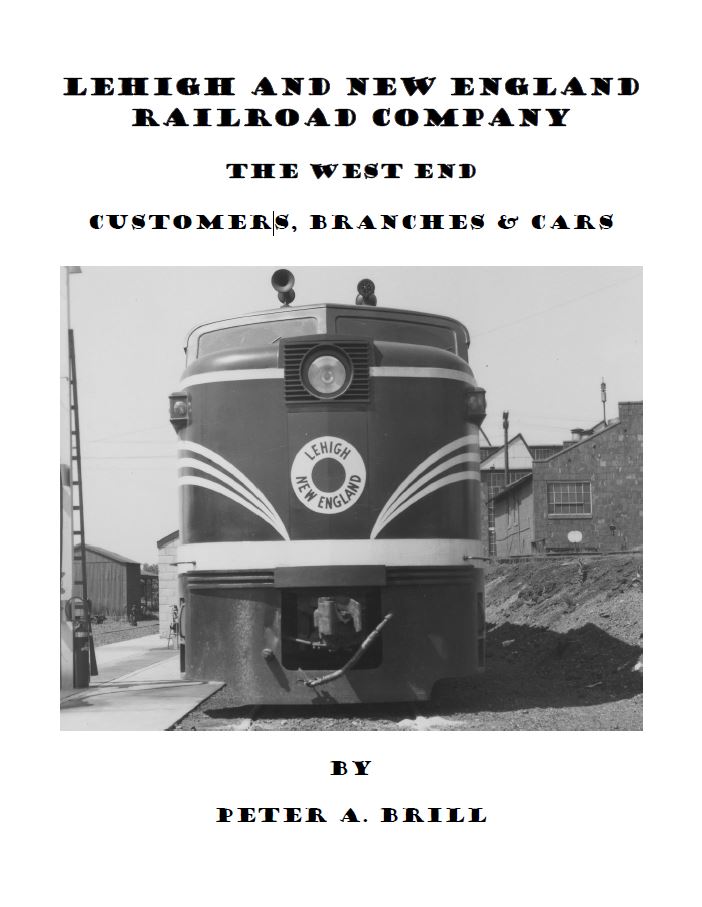 BK-LNE-WE2
$ 58.00 USD
This product is out of stock.
Product is not available in this quantity.

The Lehigh and New England Railroad had a dual personality. On the eastern end, in New Jersey and New York, it basically operated road freights over its tracks and those of other railroads on the way to Campbell Hall and Maybrook Yard. Interchanges were maintained with the NYS&W, DL&W, Erie, O&W, NYC and NYNH&H. A small number of local customers were initially served by locals and later by the main line freights.

The western end of the railroad, the section in Pennsylvania, possessed a different character. This is where the carrier originated the vast bulk of its traffic. The L&NE was fortunate to have three major industries in its territory.

The slate industry had developed considerably by the time the L&NE succeeded the Pennsylvania, Poughkeepsie & Boston Railroad. It was largely confined to the Pen Argyl and Bangor regions and involved intense competition with the DL&W’s Bangor & Portland Division which had a considerable head start. The L&NE built a number of branches and successfully engaged the DL&W in court. Box cars carried outbound loads of slate products while there were inbound loads of coal for power houses. By 1930, the slate industry was in decline and it had virtually disappeared by 1940.

The Portland cement industry commenced an era of explosive growth along the L&NE with the opening of Nazareth Portland Cement Company’s mill at Nazareth in 1898. By 1904, eight mills, most already expanded at least once, were loading sacks of cement into box cars and receiving coal to fuel their boilers and kilns. In the 1930’s, the L&NE was an industry pioneer in acquiring a large fleet of covered hoppers specifically developed to haul cement in bulk. The mostly good times lasted into the late 1950’s when truck competition had evolved to the point that it had become a formidable competitor for bulk cement shipments and cement mills were building specialized truck loading facilities.

The anthracite mining industry was long established before the L&NE was incorporated and the railroad did not extend into the coal region. Lehigh Coal & Navigation Company, a major mining company had a long history in the transportation industry through its ownership of canals and railroads which served to carry the company’s output to market. LC&N acquired the L&NE to control part of a route to New England for its anthracite. Under the leadership of W. A. Lathrop the Tamaqua Extension was built to bring the L&NE to a connection with LC&N’s Panther Creek Railroad in 1912. In 1914, the L&NE bought the Panther Creek Railroad and thereafter directly served LC&N’s collieries. Anthracite quickly became the railroad’s top tonnage item but 1917 marked the apex of the industry’s production and by the 1920’s the industry was in a long term decline.

Bituminous coal for the fire boxes of New Haven steam locomotives and the kilns and power houses of cement mills became an increasingly important commodity for the L&NE. Over the last five decades of the railroad’s existence, it remained profitable with a dependence on cement, anthracite and bituminous traffic.

This book explores each of the three major online traffic-generating industries along the L&NE in more detail than the companion volume which focuses on history, operations and infrastructure. This book also presents a somewhat detailed examination of the specialized car fleet the railroad developed to serve its customers. A census of many other smaller customers as well as their sidings is presented. There is also additional coverage of various branches built to access new customers or open up land to industrial development; Saylorsburg Branch, Palmerton Branch, Catasauqua Branch, Martins Creek Branch, Bethlehem Branch and the Allentown Branch.