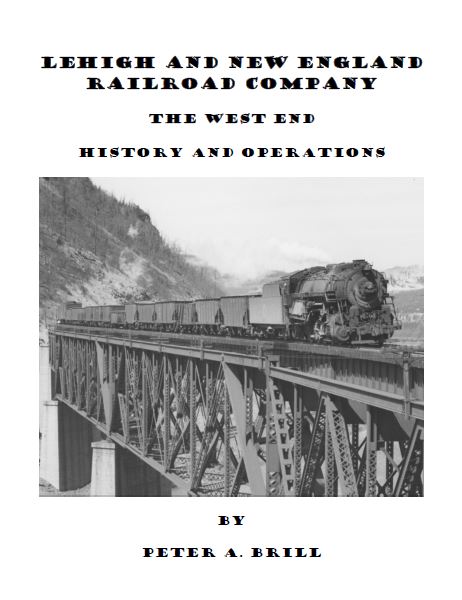 BK-LNE-WE1
$ 62.00 USD
This product is out of stock.
Product is not available in this quantity.

In 1895, the L&NE arose from the ashes of the Pennsylvania, Poughkeepsie & Boston Railroad which at least had managed to open the long-sought route from Slatington to Campbell Hall, a goal that had eluded the South Mountain & Boston and a succession of other companies for several decades.

The L&NE was fortunate to traverse the Slate Belt which was booming. Within a few years of its organization the railroad built numerous branches to serve slate quarries and factories in the Pen Argyl and Bangor areas. Soon another industry blossomed in the L&NE’s territory as Portland cement mills started to sprout up in Northampton County. Within a few years, cement tonnage surpassed slate tonnage.

But the major tonnage commodity still eluded the L&NE. Anthracite coal was the foundation on which a number of railroads were built and found prosperity. Unfortunately, the anthracite fields lay outside the L&NE’s territory. However, a leading mining company, with a long history of controlling canals and railroads, wanted its own route as far as possible toward the important New England market.

Lehigh Coal & Navigation, in partnership with the Central Railroad of New Jersey, initially controlled and fostered the growth of the Lehigh & Hudson River Railway as a route for its anthracite to New England via the fledgling Poughkeepsie Bridge Route. Later, in the face of westward expansion efforts by the New Haven Railroad, LC&N was forced to relinquish control of the L&HR but moved quickly, in 1904, to purchase control of the Lehigh & New England Railroad, still a lightly trafficked line between the Lehigh Valley and Philadelphia & Reading railroads at Slatington and Campbell Hall where connection was made with the Poughkeepsie Bridge Route.

LC&N finally had a streamlined, single-carrier route to the New Haven at Maybrook Yard and the L&NE became a major anthracite carrier. For decades, anthracite and Portland cement, originating on line, and bituminous coal, received at Bethlehem Junction from CNJ/Reading, dominated the tonnage of L&NE freights running from Pen Argyl eastward through New Jersey and New York to Maybrook Yard.

The slate industry was basically a nonfactor by 1940. The anthracite industry went into a calamitous, long term decline not too long after peaking in 1917. Finally, the impending diversion of cement traffic to trucks so clouded the prospects for the L&NE that LC&N elected to sell whatever railroad assets it could and abandon the rest.

On October 31, 1961, the ICC formally approved the sale of parts of the Lehigh & New England Railroad to a new CNJ subsidiary, the Lehigh & New England Railway. The sale was completed that day and the L&NE Railway took over thirty-eight miles from Allentown/Bethlehem to Martins Creek primarily to serve the Lehigh Cement District and six miles from Hauto to Tamaqua to serve the remaining anthracite producers. The L&NE’s traffic producing trackage was preserved while the route from Pen Argyl to Maybrook Yard, basically paralleled by the L&HR out of Allentown Yard, was abandoned as it generated little business.

This book is a history of the L&NE’s operations in Pennsylvania, the region which basically generated the carrier’s carloadings. It also describes the company’s motive power development. Some information is provided on the cement, anthracite and slate industries as well as certain branches. A companion volume contains the bibliography and provides a more extensive treatment of the major industries, other customers, some branches and detailed coverage of the car fleet.