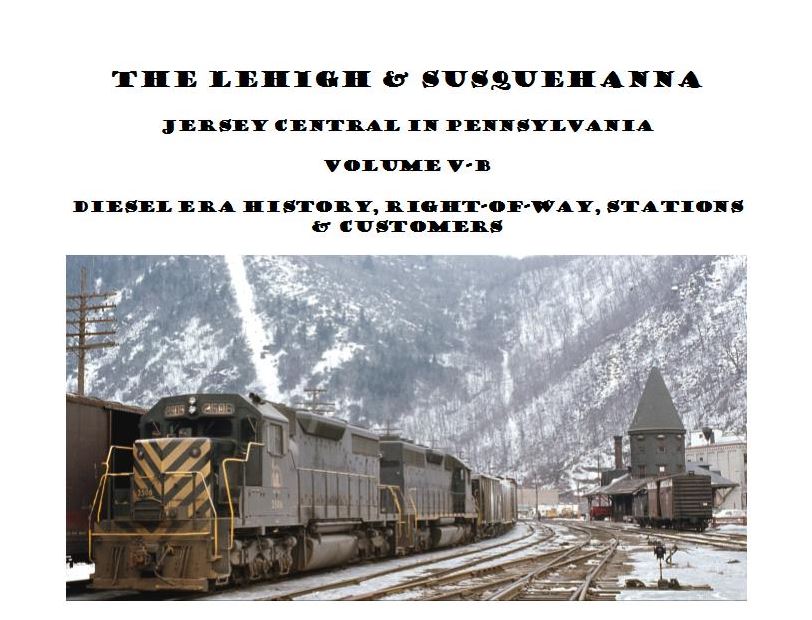 BK-CNJ-V5b
$ 67.00 USD
This product is out of stock.
Product is not available in this quantity.

Coverage of the final era of CNJ’s operations in Pennsylvania, 1947-1972, has required the splitting of volume V into two books. The contents of volume V-B, which focuses on history, right-of-way, stations and customers, are as follows:

The L&S, built for anthracite traffic, funneled ever-dwindling hard coal tonnage eastbound to tidewater from Ashley, Penobscot and Mauch Chunk yards. Most remaining breakers were closed as Glen Alden Coal centralized coal preparation at Huber Breaker. CNJ reconfigured operations to focus on general freight traffic and unit bituminous coal trains via Allentown Yard. Allentown Yard was modernized in 1951-52 and again in 1955-1957. Penobscot Yard was abandoned while Ashley Yard was expanded. In 1965, CNJ, LV and RDG coordinated and rationalized their operations in the Lehigh Valley.

The first road freight diesels arrived in 1947. The immediately obvious economic benefits of diesel operation occasioned the closure of Ashley Planes the next year. Dieselization was completed and steam operations ended in Pennsylvania in 1953.

Abandonment of the L&NE in 1961 permitted CNJ to buy the trackage generating the anthracite and cement carloadings as well as a large number of sorely needed box cars and covered hoppers to augment its own car fleet.

This was an era of contraction and ultimate abandonment. The economics of dieselization, CTC installation, unit trains and facilities rationalization and the resultant employment reductions could not compensate for the decline in anthracite coal traffic, loss of the electrical generating market for bituminous coal to less polluting fuels, a shrinking industrial base and the rise of the trucking industry.

CNJ pulled out of Pennsylvania on March 31, 1972. LV took over with the exception of the former L&NE operations. CNJ and EL instituted ES-99/SE-98 via the High Bridge Branch to route traffic between Elizabethport and Scranton and keep it off the competing LV. CNJ and RDG cooperated to institute JH-1 and HJ-2 to provide expedited service between Jersey City and Rutherford Yard.

330 pages, soft cover, glossy paper, indexed, bibliography supporting all six books in the series, 159 photographs including 73 in color, 18 maps, 36 illustrations and 92 examples of newspaper and magazine articles plus railroad paperwork.