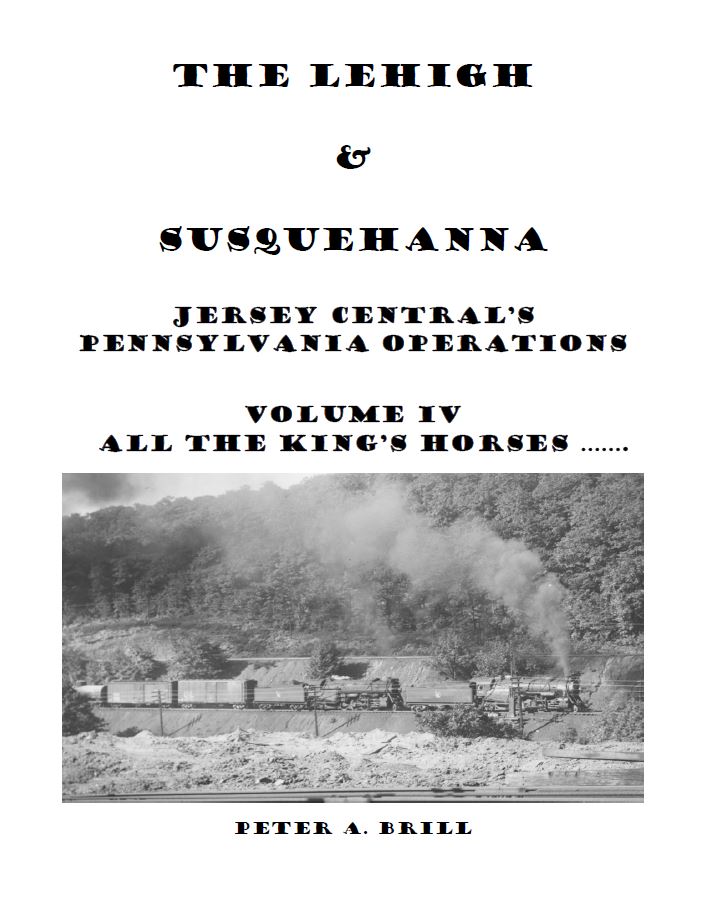 BK-CNJ-V4
$ 59.00 USD
This product is out of stock.
Product is not available in this quantity.

The L&S PA Operations V4 book is self-published by the Author, Peter Brill.  It is volume 4 of a planned 5 volume series on the topic.

Volume IV covers 1918 through 1946. It begins with the arrival of the Mikados and Pacifics which, along with the Ashley Planes, handled most of the main line operations throughout this era. It ends with steam and the Planes still dominant but Baldwin double-ender diesels in passenger service and orders for road freight diesels on the books.

The first examples of CNJ’s finest steam freight power, the Mikados, arrived in 1918. Arrival of the final order in 1925, created a fleet of eighty-six engines which dominated road freights through the balance of this volume’s era while bumping camelback 4-8-0’s, 2-8-0’s and 4-6-0’s into lesser assignments. The Ashley Planes continued to hoist most of the freight tonnage out of the Wyoming Valley. Concurrently, large, modern Pacifics took over the main line passenger duties from camelback 4-4-0’s and 4-6-0’s. Bridges had to be replaced and facilities upgraded to handle the new power. In 1946, CNJ placed its first orders for diesel road power, EMD F-3’s and Baldwin DR 4-4-1500’s and took delivery of its first road diesel passenger power in the form of Baldwin DRX 6-4-2000’s, units unique in the American railroad industry for their double-cab configuration.

CNJ’s facilities in Mauch Chunk and Ashley declined in importance relative to Allentown and Bethlehem. The anthracite coal and anthracite iron industries faded but the Lehigh District Portland cement industry grew until midway in the era. The Alphabet Route joined the Central States Dispatch as another important freight routing via Allentown. Major capital investments included expansion and continued modernization of Allentown Yard; construction of a new engine terminal in Bethlehem and installation of a new coal dumping pier in Jersey City.

Under a federal order, CNJ sold the Lehigh & Wilkes-Barre Coal Company in 1923. The buyers sold the business in 1930 to the Glen Alden Coal Company, owner of the DL&W’s former coal operations. This created the industry’s largest operator. In 1939 Glen Alden closed most former L&W-BC breakers and centralized their coal preparation, except for Wanamie and South Wilkes-Barre, at the new Huber Breaker in Ashley.

On August 5, 1946, the Central Railroad of Pennsylvania, formerly CNJ’s subsidiary, the Easton & Western Railroad, took over operations in Pennsylvania in an attempt to shield Pennsylvania income from excessive New Jerseytaxes.