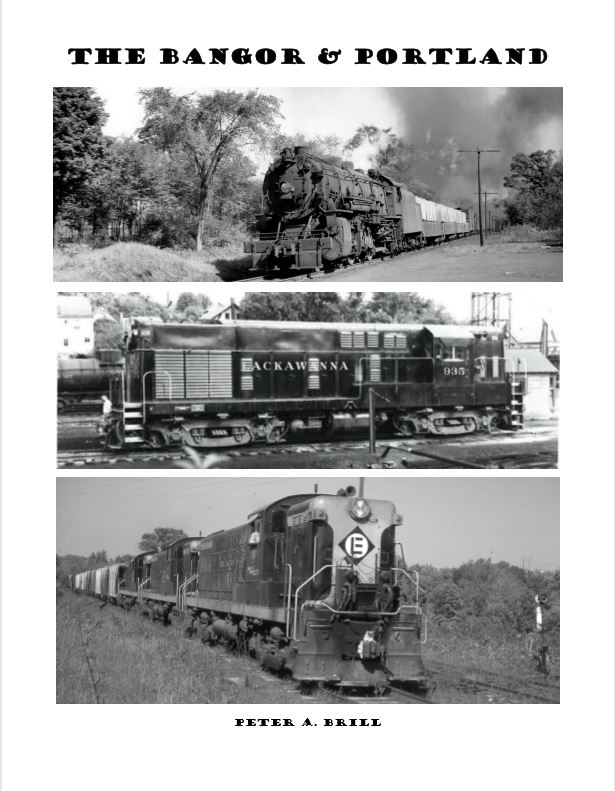 BK-BP
$ 65.00 USD
This product is out of stock.
Product is not available in this quantity.

The Bangor and Portland Railway was organized by Conrad Miller and a number of Bangor businessmen in 1879 for the modest purpose of providing area slate quarries with better access to the DL&W at Portland than via horse teams. The 8-mile road was extended repeatedly during Miller’s presidency until its main line stretched 38 miles and it dominated the slate district in Northampton County in competition with the Lehigh & New England Railroad. During this time, J. I. Blair, a major DL&W stockholder and board member became an investor in the B&P.

The little carrier soon found itself surrounded by an unforeseen bonanza, the Lehigh Cement District of Northampton County as, beginning in 1898, cement mills began to spring up from Nazareth to Martins Creek. This fortuitous turn of events thrust the B&P onto a larger stage as major carriers became aware of its potential. Miller may have wanted to keep the B&P independent but the strong influence of Blair convinced him to sell the company to the DL&W in 1900. The DL&W was in the early years of the presidency of W. H. Truesdale who would focus on rebuilding and reengineering the main line between Hoboken and Buffalo. Concrete construction would be a hallmark of many of the major DL&W capital projects and the cement would come from the mills along the B&P. The slate business was soon dwarfed by the cement traffic.

The B&P functioned as a semi-independent entity within the DL&W until 1909 but it would retain its seniority roster and close-knit character into the 1960’s. Its steam power would be modest, mainly 2-8-0’s and 2-8-2’s of unremarkable size, dwarfed by the 2-8-0’s and 2-10-0’s of the rival L&NE, but well suited to the operating scheme of a fleet of local drills or “roustabouts” as the DL&W termed them. Bangor served as the road’s headquarters while Portland was the connection to the DL&W’s main line.

Connections were made at Bath Jct. with the Northampton & Bath and L&NE; at Belfast Jct. with the LV, at Martins Creek with the PRR and at Portland with the L&NE. The B&P’s fleet of local freights was carefully orchestrated to meet the requirements of the cement mills for placement of empties in the morning and timely pickup of the loads later in the day with deadlines to make deliveries to its connections as well as DL&W’s own symbol freights so they could move the cement loads expeditiously to their customers, mostly in the metro New York City region often via Hoboken on New York Harbor. A nightly freight, the “Cementer” made the round trip between Port Morris Yard and Portland to have the cement loads available to move out on the L&HR to Maybrook Yard for the New Haven to haul to New England destinations and DL&W symbol freights to forward to Hoboken.

The B&P retained its individuality in the diesel era as it was the base for DL&W’s small fleet of six Fairbanks Morse H-16-44’s which were augmented by Alco RS3’s. In turn, four-axle Baldwin road switchers replaced the little FM’s and they, in turn, were replaced by GP7’s and RS3’s. C424’s took over assignments in the early 1970’s until pollution regulations sent them west and the GP7’s returned.

The B&P, despite its short length, was second only to the Bloomsburg Branch as DL&W’s largest tonnage producer. Inbound bituminous coal, some of it in unit trains, added to the outbound cement tonnage. Completion of Metropolitan Edison’s power plant at Portland in the mid-1950’s brought a much greater number of unit coal trains onto the property and a variety of main line power into Portland.

The formation of Erie Lackawanna had little effect on the B&P. Employees from other areas of the railroad were quick to notice the “insular” nature of the B&P, now reduced to the status of a branch but still a highly coordinated, heavy tonnage originator and receiver.